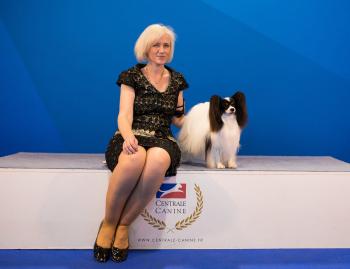 I was born in Belgium and ever since the age of 6 years, I have been involved with dogs and dog shows. I’m breeding papillons with my family under the kennelnames Daydream Believers & De Costalina.
I started competing in Junior Handling at the age of 10 years, showing almost all breeds from all groups during my years in the Junior handling ring, but having the fondest of memories on my times in the ring with the American cockers, Irish Setters and Siberian Husky.

At the age of 13, I travelled with the a group of Belgian and Dutch handlers to the Handling Team match competitions in Salisbury in England, where I won ”Best overseas handler” for a couple of years in a row. These experiences got me even more hooked on this hobby and I asked my father to drive me to dogshows almost every weekend since then.

After the junior handling career I took a small break from dog shows, only to return a couple of years later with Australian shepherds. That made me realize I already had the perfect breed in our life: the Papillon.

In the past 30 years we have piloted 33 dogs to their Euopean, World or Crufts winner titles with the ultimate cherry on the cake winning BIS at Crufts 2019 with our own bred papillon.

I only occasionally accept the request to judge Junior handling, but always follow this competition ringside that started my own passion for showing and breeding dogs.

I feel absolutely honoured to judge these youngsters here and I hope I can help mold the future of our sport. 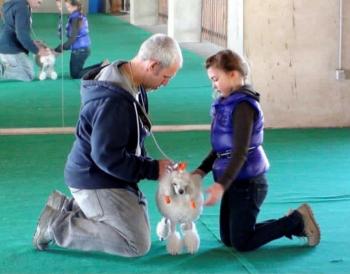 I’m really excited to have been invited to judge your JH final and teams competition at the Nordic Winner show in December, 2022!

I have participated as an exhibitor many times in Finnish dog shows, especially the Helsinki Winner shows as well as the Nordic winner shows which I find to be amongst the best in the whole world!

I have also judged JH on many occasions and have given many seminars and have mentored many young children regarding showing and Junior Handling for many years.

I started showing dogs as a young boy in the USA 50 years ago and have dedicated my life to dogs and the sport of dog shows as a trainer, breeder, groomer and all-breed Professional Handler. I have traveled to compete at dog shows in more than 40 countries around the world showing over 200 different breeds of dogs winning several groups at World and European Winner shows as well as Best in Show at the World show in Dortmund in 2003.

In judging this competition, I will be evaluating how well the handlers communicate and encourage their dogs in a positive way, giving importance to how well they make the dogs shine while being as invisible as they possibly can. 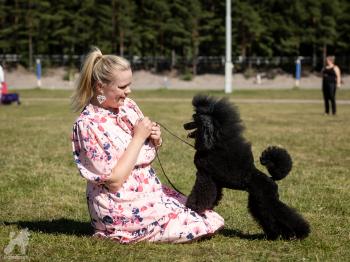 I got to know the sport of junior handling at the beginning of the 2000s and had time to compete for four years in the older age group. I competed with borrowed dogs for most of the time, which allowed me to become familiar with different breeds and handling dogs from different FCI groups.

Due to a mild dog allergy, our family's breed was poodles, and I got my first dog when I was 12 years old. Poodles have taken my heart and over the years, and eventually the love for this breed deepened into an interest in breeding. Therefore, I breed mainly black and brown medium-sized poodles on a small scale.

In addition to shows, I have also practiced many other sports with my dogs and I strongly believe that practicing different sports supports each other. At dog shows, it’s important for me to see that both the handler and the dog enjoy being in the ring. It's wonderful to see the spontaneous joy of the handler and the dog working together, however, in a way that the dog is the star of the ring. I like that the handler is calm, and with small gestures manages to create a seamless cooperation with the dog.

I'm looking forward to my honorary duty to judge the Finnish Championship final in December!