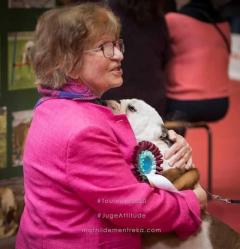 Animals have enriched my life from early childhood. I grew up in company of a German Drahthaar and later a German shepherd as well as cats and rabbits. At the age of 10 years, another passion took place in my life: horses, horse riding and jumping.

1975, while living in Paris, I have acquired my first Afghan hound “Lagash” and since this time, a lot of them shared my life. I have bred this breed under  the prefix “Bou Saâda” and many dogs have acquired champion titles (conformation and working).

I had the pleasure to judge all over Europe, mainly at Bundessieger Dortmund 1999,  the Borzoi Specialty of Ontario/Canada 2009, at Kartano weekend Helsinki, la Nationale d’Elevage du Club du Barzoï/France, in 2011 Donaueschingen/Germany, Bundessieger Tulln/Austria 2013, Spitz Clubshow  in Wangen/CH and in 2014 The Annual Greyhound Show in Germany, Netherlands and Italian Afghanhound Clubshow 2015, 45th Championship Show Borzoï Club of Victoria /Australia 2016, Eurodogshow Kortrijk 2016, sighthoundshow at Strömsholm Castle 2018, sighthoundfestival Pompadour 2019 as well as some very nice shows in CZ, NL, Sweden, SK and Croatia.

In 2011, I was the organizer of the International Borzoi Conference, which has been held in Fribourg/Switzerland coupled with a double dog show.

Judging since 1990 my goals have not changed:  I look for type, soundness and good temperament.