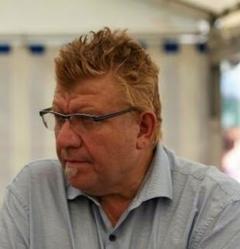 My name is Sonny Ström from Sweden, married since 1996 to my deeply beloved and missed wife Lilleba, who passed away May 2021. I work as an engineer in a heating plant, my wife Lilleba worked as a midwife I live outside Avesta, approx. 1 1/2 hours’ drive from Stockholm, we have twin boys together and she had 3 more children. I was brought up in countryside and lots of different animals, the first dog we had was a German Shepherd, my interest in dogs started when I was 10 years and our family bought a Dachshund.

I’ve been authorized as an FCI judge since 1997, I’m authorized to judge approx. 110 breeds in group 1, 2, 4, 5, 6, 7 and 9 and judge approx. 15 dog shows each year, I have judged in all the Nordic countries as well as in Belgium, England, Germany, Portugal, Czech Republic, Slovakia and Australia. Since 1986. I have also been involved in mental tests of dogs, since 2002 I judge two different kind of mental tests.

From 1985 until 2017 I have been involved in all kind of functions in the board of Swedish Breed Club for Belgian Shepherd, in many working dog clubs and board of a regional kennel club, a couple of years in the central Committee for Dog Mentality within Swedish KK.

Our main breed since 1981 are Belgian Shepherds, 1985 until 2020 we have bred 40 litters Tervueren, Groenendael and Malinois, imported around 10 Tervueren, Malinois and Groenendael from Belgium, France, Holland, Czech Republic and Finland, exported to Finland, Norway, Denmark, Lithuania and France. Working with our dogs in mainly tracking, service dogs at Swedish defense, search, messenger and obedience.

Other interests beside dogs, family, being in nature, football and all kind of sport.